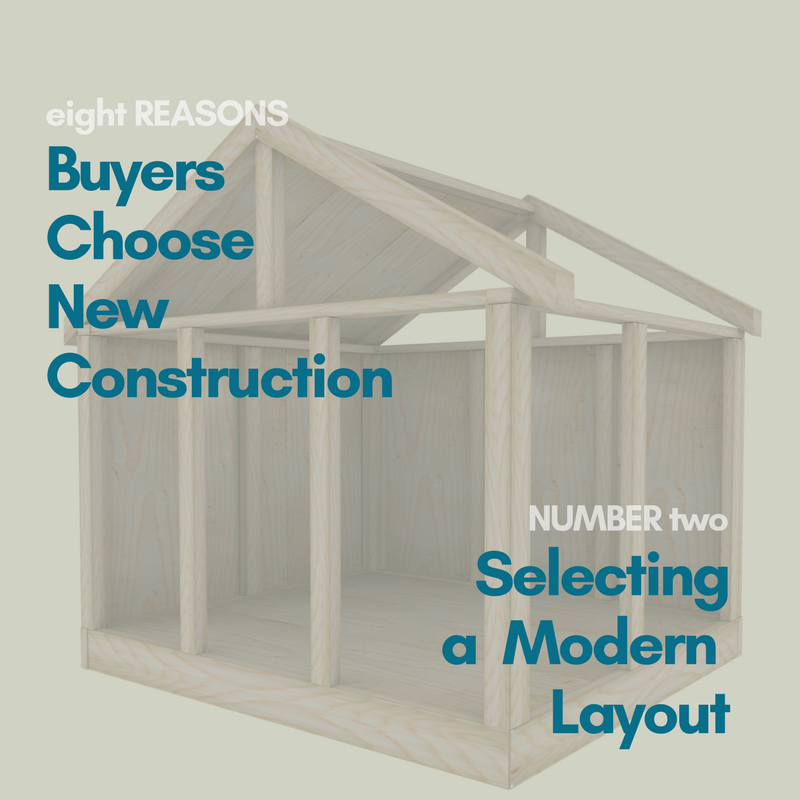 Today’s new homes offer more benefits than ever before, in terms of technology, energy efficiency, and style. This is the second of a series of articles outlining eight of the reasons many buyers are making the choice to build from the ground up, or connect to a home at some point in construction.

Although you might find a selection of newly constructed row houses in a trendy urban area, new construction generally reflects an open design where rooms serve multiple purposes. Many buyers are drawn to new construction because of open floor plans, which encourage a more modern relationship between what was once designated as a family space and a defined separate space to welcome and entertain guests. In an open concept home, the kitchen becomes the hub of the home, offering island or counter-top height seating as a space to snack, do homework, or assist with meal preparation. Kitchens generally serve as a central hub of a larger single gathering space, where members of the household can engage in a variety of activities within ear shot and sight of each other. This “great room” replaces formal spaces that were once divided, and often seldom used.

This open layout allows family members and guests to interact and work together, so that meal preparation becomes part of the event, instead of something that takes place before guests arrive. In smaller homes, casual seating areas often entirely replace a formal dining room. Technology, being both a blessing and a curse, has extended the work day for many. Cell phones, computers and the Internet have extended the work day into the evening for many. Bringing work home, or even working entirely remotely from home, means that a separate room toward the front of the home often functions as a home office or study, instead the formal living room that it was decades ago. As a reflection of the prominence of a kitchen in modern design, many of the upgrades buyers select are added to the kitchen, making it one of the more aesthetically appealing, technologically equipped and expensive areas of the home.

The shift to an open concept has largely been influenced by changes in culture, such as the previously mentioned need or ability to work from home. Television design or remodeling hosts use the term “open-concept” so often we take it for granted that this is the desired plan for modern living. The days when families spent Sunday afternoon calling on neighbors have been replaced by inviting a large group of people to enjoy a televised game or backyard BBQ. The outdoor spaces often become additional living space, where members of the household can dine, prepare food, and gather around a fire-pit or television. In general, this is a reflection of a more casual American culture.

Although it’s possible to knock down walls and remodel an existing home to create a open concept layout, the costs can quickly add up, particularly if the walls that need to come down are load bearing and beams or supports need to be added. Changes in building materials and practices have allowed builders to offer open concept floor plans at almost any price point. Maintaining simplicity in design means fewer walls and requires fewer building materials. Truss construction avoids a center load bearing wall, and allows for an expanse of long distances. If is also more cost effective since trusses are generally built off-site, reducing both labor costs and waste.

Aside from social benefits, open concept designs allow for light to flow through the home from different sides, allowing both more natural light and light at various times throughout the day. Homes with open concepts also allow the owners to take advantage of a view from many functional areas within a larger multi-purpose room.

In custom homes, the sky is the limit when it comes to implementing your personal preferences for the layout of your new home, whether you sift through books or magazines and find the plan of your dreams or hire an architect to turn your scribbled drawing into a building plan. In tract housing (discussed in the first blog in this series), buyers still have a variety of options of floor plans, which have the side benefit of offering lower construction costs because elements of the home (such as trusses, cabinets, and even walls) can be built offsite and ordered in bulk. Labor costs are also reduced, as those working on the home are familiar with a model they have built before. Having built the home before, builders are also better able to estimate costs and price a home well in advance of its completion. Even though the cost of materials generally means that new construction is more expensive than existing construction, these savings allow builders to bring costs down so new construction is a viable option at most price points.

Although open concept design is clearly the most common modern design choice, it does put pressure on the chef to quickly place dishes used in food preparation in the dishwasher. It also offers less privacy and requires parents to talk over children playing in another corner of a larger gathering space, or kids to talk over parents screaming at the television during a sporting event. Even so, the ability to choose a floor plan that works best for your family is a reason many buyers choose to purchase new construction.